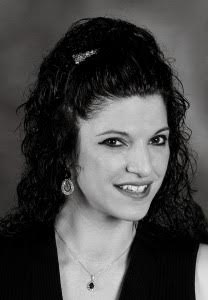 Bestselling author Violetta Rand was raised in Corpus Christi, Texas and spent her childhood reading, writing, and playing soccer. After meeting her husband in New England, they moved to Alaska where she studied environmental science and policy before attending graduate school. Violetta then spent nearly a decade working as a scientist, specializing in soil and water contamination and environmental assessments.

Violetta still lives in Alaska and spends her days writing romance. When she's not reading, writing, or editing, she enjoys time with her husband, pets, and friends. In her free time, she loves to hike, fish, and ride motorcycles and 4-wheelers.

Violetta is traditionally published through Random House for her contemporary MC line as well through small press for her Viking’s Fury series with Dragonblade Publishing. 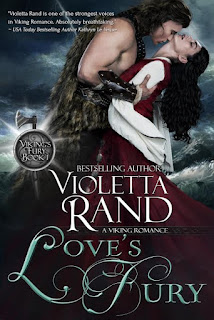 Link to  Love’s Fury, Book One of the Viking Fury Series:
Love's Fury by Violetta Rand on Amazon:

Caught between duty and passion…

After losing a drinking wager with his eldest brother, Konal the Red finds himself drafted by the Danish prince and fighting in Northumbria. Once his military contract expires, he intends to return to Norway where he belongs. But his exploits have earned him respect, lands, and a few enemies. Rewarded with a Saxon beauty who inspires more than simple passion, he’s determined to win her trust and body.

Caught between a heart locked on revenge and seduction…

Silvia, the only child of the church undersecretary, vows to avenge her beloved father after he’s killed in a siege. It doesn’t matter which Viking wielded the axe—an eye for an eye is the only thing that will satisfy her. When Konal claims her as a spoil of war, she sees it as the perfect opportunity for revenge. She never expects to discover a pure heart buried beneath Konal’s barbaric exterior.

As Konal slowly rekindles a spark of life inside her, their fates become hopelessly entwined. Not only must they withstand the violence of the envious lust-mongers who threaten them, Konal and Silvia must choose what’s most important—tradition or love that cannot be denied.

Silvia clutched a dozen scrolls to her chest as she raced through the scriptorium searching for somewhere to hide. She covered her mouth and coughed violently. Smoke filled every corner, diminishing the afternoon sunlight that typically filled the high-ceilinged room. Shelf after shelf of manuscripts had been obliterated by the steel axes these heathen occupiers hefted. God’s breath… She halted. A man-beast of mythological proportions stood nearby, his attention focused on the table before him. The place where the monks passed their long days studying.
“No!” She couldn’t remain silent—couldn’t stop herself from screaming as he tipped the torch he held, the loose parchments providing the kindling the flames needed to spread.

She clung more desperately to her precious cargo, texts her father specifically requested she grab before he was cut down. She closed her eyes for a brief moment, stifling tears that threatened to spill, ones she’d held back so she could think clearly. But nothing helped now. How could she keep the harrowing memory of her sire’s death out of her head? The answer came as goosebumps crept up her flesh like a cold wind.

She felt the weight of the intruder’s stare and opened her eyes. Had the heathen heard her yell? Or was he simply in search of something else to burn?
“Jeg er glad for å se at det er mer enn bøker i denne forlatt stedet.”

His words were not lost on her. Her father had taught her enough Norse to communicate with the filthy invaders. This was no Dane, but a Norwegian. The bloody animal dared to humor himself whilst devastating her home.

“Brenn i helvete,” she cursed him. Burn in hell.

He laughed riotously, then turned his attention back to the room.

Fool. He obviously underestimated the threat of a woman. Panic gripped her heart, but she had to remain focused. The secret tunnel running along the north wall came to mind. If she could reach it … her gaze searched for a clear route. Unfortunately, she couldn’t see three feet in front of her. Nor did she know how many men were still inside. Her greatest chance of survival depended on getting out, now.

Silvia ran for the main entrance. She’d spent a happy childhood here—growing up exploring the buildings while her father worked. If the fire wasn’t extinguished, all would be reduced to pile of smoldering rubble. A part of her soul was dying, consumed by the same flames destroying the only scriptorium in the north.

Outside, conditions weren’t much better. Bodies littered the ground. Saxons—men of honor who risked their lives to reclaim their city were dead or dying. It was too late, in any case, to fight. Now mere survival would have to do. Amidst the agonizing screams and sounds of clashing metal, she hunted frantically for a place to stash the scrolls. Somewhere no one would look.

The ancient cemetery came into view. Who disturbed the dead when a city was under siege? She knew she’d done everything possible to help her father. Fulfilling his last request was all she had left to give him.

By some miracle, there was a half-dug grave nearby. It hadn’t rained in days and the soil was dry. There was time to retrieve the scrolls later. She reverently laid them on the ground, unpinned her thin cloak, then knelt, wrapping the delicate papers in her mantle. Her heart pounded as she placed the bundle in the earth, then spread loose soil over it.

Satisfied they were safe, she scrambled to her feet, noting her exact location. God would lead her back here if she forgot. And if he didn’t, she’d sacrifice her life trying to find it. But what now? The sanctuary appeared unharmed. If the Vikings weren’t trying to purge the northlands of holy sites, why were they targeting just the repository? She didn’t understand.

The sounds of battle grew louder…

She must find shelter. The cottage she had shared with her father was on the edge of the extensive church grounds, nearly a mile away. Vikings left nothing unsearched, no one alive—no woman untouched.

The deep voice cut through her like a blade and she didn’t move. She should have never let her mind wander. Something sharp and hard stabbed her in the back.

“I accept your invitation.”

Accept her invitation? She gasped upon remembering where she’d told him to go.
To hell.

Legs as heavy as lead, she did as he demanded, dreading the moment she’d see him clearly. In the smoke filled scriptorium, he had been little more than a nightmarish shadow. But in the light, truth hit her harder than anything. Despite the soot and ash covering his face, nothing could mask his exquisite features. Full lips—high cheek bones—a straight nose. Bronzed skin. His stark blue eyes impossible to avoid. And his hair, long and dark with coppery streaks. If she didn’t stop staring, he’d misinterpret her intention, possibly rape her. Silvia tried to avert her eyes.

His axe rested against his left leg. She swallowed hard, overwhelmed by the magnitude of his presence. When he pointed across the field, toward the courtyard, she shook her head, adamantly refusing to go anywhere with him. “I’d rather die than follow you.”

He growled, grabbing the top of her gown, her refusal obviously igniting his anger. The garment ripped, exposing her flesh. He gazed at her hungrily, a wicked grin splitting his face. Then his hands were on her arms, his filthy fingers digging into her skin as he shook her into submission. “Fail to obey me again and I’ll strip you.” He let go, shoving her backward.

She stumbled but didn’t fall. If he wanted her dead, she’d be dead. If he wanted to ravish her, she would have been flailing helplessly on the ground already with her skirt hiked over her waist. Hatred flowed as freely inside her as blood. But she didn’t know how to take his lack of violence.

He again pointed in the direction he wanted her to go. “Walk.”

Head held high, Silvia remembered the lessons her father had painstakingly taught her over the years. Hard lessons meant for people who lived in occupied lands. Her father had said subjugation doesn’t mean you must abandon pride. Christ instructed slaves to love their masters. She gritted her teeth. She’d never love a blasted Viking.

Posted by Janet Greaves at 1:15 AM