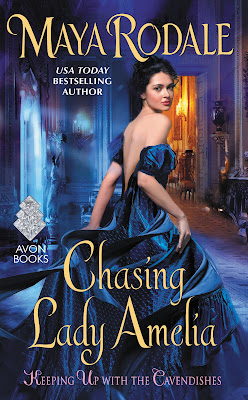 In the second novel of Maya Rodale’s
enchanting Keeping Up with the Cavendishes series, an American heiress finds
her reputation—and heart—in danger when she travels to London and meets a
wickedly tempting rake

Lady
Amelia is fed up with being a proper lady and wishes to explore London, so one
night she escapes . . . and finds herself in the company of one Alistair
Finlay-Jones. He’s been ordered by his uncle to wed one of the American girls.
How lucky, then, that one of them stumbles right into his arms!

Alistair
and Amelia have one perfect day to explore London, from Astley’s Amphitheater
to Vauxhall Gardens. Inevitably they end up falling in love and making love. If
anyone finds out, she will be ruined, but he will win everything he’s ever
wanted.

When
Amelia finds out Alistair has been ordered to marry her, he must woo her and
win back the angry American girl. But with the threat of scandals, plural,
looming . . . will he ever catch up to the woman he loves? 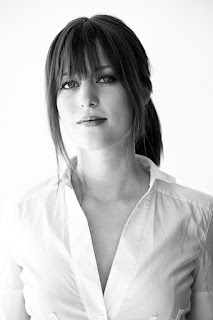 Maya
Rodale began reading romance novels in college at her mother’s insistence
and it wasn’t long before she was writing her own. Maya is now the author of
multiple Regency historical romances. She lives in New York City with her
darling dog and a rogue of her own.

I’m a New York City girl who loves to read and write romance novels (12 and counting!). I enjoy Beyoncé dance parties, romantic comedies, and talking about why romance novels matter. The hardest part of my day is staying up past 9pm. I married a great guy who thinks all my books are about him and I have the most fabulous dog who knows everything is all about her (Peek at pictures here!). My website is www.mayarodale.com, check it out!


2.      What three things about you might surprise your readers?

1.      I once lived in London for a summer for graduate school and spent much of it researching in the British Library and trekking around to every museum and historical house (and gift shop). It has proven to be tremendously helpful when writing my Regency romances.
2.     I’m very short—4 feet, eleven and three quarter inches, barefoot. Do not forget my three/quarters of an inch.
3.     I keep a list of all the books I read, organized by year, color-coded by month. As one does.


3.      Is there a genre(s) that you think “I might like to write one of those.”?
I have plenty of stories in my head and even some drafts under the bed that aren’t romance and I would love to write them (read: the muse insists I must write them). One is a Young Adult novel, the others are grown up lady fiction. But all of them will end happily J

Lady Amelia Cavendish is sister to a duke and hates it. Alistair Finlay-Jones is heir to a baron who hates him. A series of events involving scandal, laudanum and lost shoes result in these two running away for a perfect day around London, taking in the sights and falling in love. When Amelia finds out Alistair had been ordered to marry her, he must woo her and win back the angry American girl. But with the threat of scandals, plural, looming…will he ever catch up to the woman he loves?

The idea for Chasing Lady Amelia came from two distinct, but oddly compatible, stories. The first is Pride & Prejudice, which is the inspiration for book one in the Keeping Up With The Cavendishes, Lady Bridget’s Diary. In both those novels, there’s a runaway sister who definitely needs to have her story told (where did she go!? With whom!? What kind of sexy fun trouble did she get into?!) And then I noticed that the plot of my favorite movie of all time, Roman Holiday, starring Audrey Hepburn and Gregory Peck, would dovetail perfectly. While her story inspired by that film, Amelia quickly takes over and makes the story uniquely her own.

My favorite scene in Chasing Lady Amelia is a spoiler! (But don’t worry,  no spoilers here).  I’d been having trouble with the ending (I wrote it, oh, three different ways) and over dinner and drinks with my husband we schemed and plotted an alternate ending that is both funny, humorous, plays on the Alistair’s worst fears and gives Amelia a say in her own destiny.  It was a riot to write and is hopefully a delight to read!


8.      Who are some of your book boyfriends?  What draws you to them?
Not Lord Darcy! I’m much more partial to Gilbert Blythe (If you don’t know who that is, I’m so sorry). But my book boyfriends tend to be the ones I’m writing currently about, so right now they are a hot, hunky Marquess (Lord Fox, of Lady Claire is All That) and a rebellious, American duke (the final book in the Cavendish series). I’m a lucky girl ;-)

Something sparkling! Whether it’s champagne (or Prosecco, I’m not picky) or sparkling water with extra limes please thank you very much. Cheers!

I am Keeping Up With The Cavendishes! I’ve just finished up book three in the series, Lady Claire is All That (12/27/16). Readers will see this smart heroine make an unexpectedly perfect match with the hunky “jock” of the haute ton, Lord Fox, in a story that riffs on the rom com She’s All That. Oh, and then I’m writing the duke’s romance...

Posted by Janet Greaves at 6:30 AM