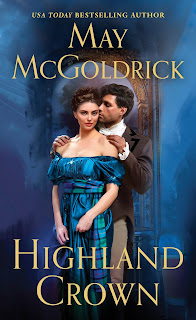 Scottish pride, persuasion, and passion—this is Highland romance at its breathtaking best.

Inverness, 1820
Perched on the North Sea, this port town—by turns legendary and mythological—is a place where Highland rebels and English authorities clash in a mortal struggle for survival and dominance. Among the fray is a lovely young widow who possesses rare and special gifts.

WANTED: Isabella Drummond
A true beauty and trained physician, Isabella has inspired longing and mystery—and fury—in a great many men. Hunted by both the British government and Scottish rebels, she came to the Highlands in search of survival. But a dying ship’s captain will steer her fate into even stormier waters. . .and her heart into flames.

FOUND: Cinaed Mackintosh
Cast from his home as a child, Cinaed is a fierce soul whose allegiance is only to himself … until Isabella saved his life—and added more risk to her own. Now, the only way Cinaed can keep her safe to seek refuge at Dalmigavie Castle, the Mackintosh family seat. But when the scandalous truth of his past comes out, any chance of Cinaed having a bright future with Isabella is thrown into complete darkness. What will these two ill-fated lovers have to sacrifice to be together…for eternity?

Cinaed looked up into a woman’s face. Fine black eye- brows arched over brown eyes that were focused on his chest. Thick dark hair was pulled back in a braid and pinned up at the back of her head. Intent on what she was doing, she was unaware that he was awake.

Her brow was furrowed, and lines of concentration framed the corners of her mouth. The grey travel dress she wore was plain and practical. She was not old, but not young either. Not fat, not thin. From where he lay, he guessed she was neither tall nor short. She was beautiful, but not in the flashy way of the women who generally greeted sailors in the port towns. Nor was she like the eyelash-fluttering lasses in Halifax who never stopped trying to get his attention after a Sunday service. He didn’t bother to assess the pleasant symmetry of her face, however. The “brook no nonsense” expression warned that she wasn’t one to care what others thought of her looks, anyway.

But who was she?

The last clear memory he had was seeing a flash from the shore. The next moment his chest had been punched with what felt like a fiery poker. Everything after that floated in a jumbled haze. He recalled being in the water, trying to swim toward some distant shore. Or was he struggling to reach the longboat again?

Cinaed didn’t know what part of his body hurt more, the fearsome pounding in his head or the burning piece of that poker still lodged in his chest.

Startled, she sat up straight, pulling away and scowl- ing down at him. In one blood-covered hand, she held a needle and thread. In the other, a surgeon’s knife that she now pointed directly at his throat.

His ship. The reef. The explosion.  He  closed  his eyes for a moment and tried to clear away the fog. Everything he’d been through struck him like a broad- side.

The Highland Crown was gone. He’d detonated the powder himself. Where were his men? He’d climbed into the last longboat. They’d been fired at from the beach. He’d been shot.

Cinaed grabbed the knife-wielding wrist before she could pull it away. “Where are my men?”

An ancient woman in Highland garb slid into his line of sight behind the younger one. She was making sure he saw the cudgel she had over one shoulder.

“This one is worth less than auld fish bait, mistress,” she taunted. The crone was ready and obviously eager to use that club. “And thankless, too, I’m bound. I was right when I said ye should never have saved him.”

Should never have saved him. He released the wrist, and the hand retreated. But the dark-haired woman didn’t move away. As if nothing had happened, she dropped the knife on the cot, out of his reach. The brown eyes again focused on his chest, and she put her needle back to work.

He winced but kept his hands off the woman.

By all rights, he should be dead. A musket ball had cut him down and knocked him into the water. He should in- deed be finished. Someone on shore had tried to kill him.

But he was alive, and apparently he owed his life to this one. Gratitude flowed through him.

“Want me to give him another knock in the head?” the old witch asked.

“Last stitch. Let me finish,” she said in a voice lacking the heavier burr of the northern accent. “You can kill him when I’m done.”

A sense of humor, Cinaed thought. At least, he hoped she was joking. She tied off the knot, cut the thread, and straightened her back, inspecting her handiwork. He lifted his head to see what kind of quilt pattern she’d made of him. A puckered line of flesh, topped by a row of neat stitches, now adorned the area just below his collarbone. He’d been sewn up by surgeons before, and they’d never done such a fine job of it. He started to sit up to thank her.

That was a grave mistake. For an instant, he thought the old woman had used her cudgel, after all. When he pushed himself up, his brain exploded, and he had no doubt it was now oozing out of his ears and eye sockets. The taste of bilge water bubbled up in his throat.

“A bucket,” he groaned desperately.

The woman was surprisingly strong. She rolled him and held a bucket as his stomach emptied. She’d been ex- pecting this, it appeared. However horrible he was feeling before, it was worse now as the room twisted and rocked and spun. Long stretches of dry heaves wracked his body. “Blood I can deal with,” the old woman grouched from somewhere in the grey haze filling the room. He heaved
again. “By all the saints!”

“I’ll clean up later. Don’t worry about any of this. Go sit by the fire, Jean. You’ve had a long night.”

Cinaed felt a wet cloth swab the back of his neck and his face.

Jean mumbled something unintelligible about “weak- bellied” and “not to be trusted” and “a misery.” When he hazarded a glance at her, she was glaring at him like some demon guarding the gates of hell.

“Does my nephew know that yer a doctor?” she asked, not taking her eyes off of him as she snatched up the knife and handed it to the younger woman.

A doctor! He lifted his head to look at her again. She was definitely a woman. And a fine-looking one, at that. He was still breathing, and she’d done an excellent job on whatever damage had been done to his chest by the bullet. But the possibility of any trained physician, or even a surgeon, being here in this remote corner of the High- lands was so implausible. Male or female.

“But ye say yer not a midwife,” Jean persisted, a note of disbelief evident in her tone. “And not just a surgeon, in spite of all them fine, shiny instruments in that bag of yers.”

“I trained as a physician at a university. But I’m find- ing that my abilities as a surgeon have more practical uses wherever I go.”

University trained. Cinaed stole another look at her. She had an air of confidence in the way she spoke and acted that convinced him that she was telling the truth. And for the first time since the Highland Crown struck that reef, he wondered if his good fortune was still hold- ing, if only by thread. Lady Luck, apparently, had sent him Airmid, his own goddess of healing.

Long-forgotten words, chanted over some injury, came back to him from childhood. Bone to bone. Vein to vein. Skin to skin. Blood to blood. Sinew to sinew. Marrow to marrow. Flesh to flesh . . .

From the floor, she retrieved a bowl containing bloody cloths. A musket ball lay nestled like a robin’s egg on the soaked rags. By the devil, he thought, his admiration nearly overflowing. She’d not only stitched him together, she’d dug the bullet out of him.

The deuce! He’d never seen anyone like her. Frankly, he didn’t care if she came from the moon to practice medicine here. He owed his life to her.

You will need a large teapot for this book as you will be up all night long! This is such a wonderful, deeply romantic tale with wit, charm and lots of passion! I loved Isabella's character so much, she is one strong, gutsy heroine that you are just going to be drawn to and root for! If you love a good historical romance, with mystery and magic, then this is the book for you! 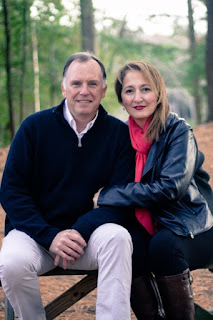 Authors Nikoo and Jim McGoldrick (writing as May McGoldrick) weave emotionally satisfying tales of love and danger. Under the names of May McGoldrick and Jan Coffey, these authors have written more than thirty novels and works of nonfiction. Nikoo, an engineer, also conducts frequent workshops on writing and publishing and serves as a Resident Author. Jim holds a Ph.D. in Medieval and Renaissance literature and teaches English in northwestern Connecticut. They are the authors of Much ado about Highlanders, Taming the Highlander, and Tempest in the Highlands.

Email ThisBlogThis!Share to TwitterShare to FacebookShare to Pinterest
Labels: Reviews