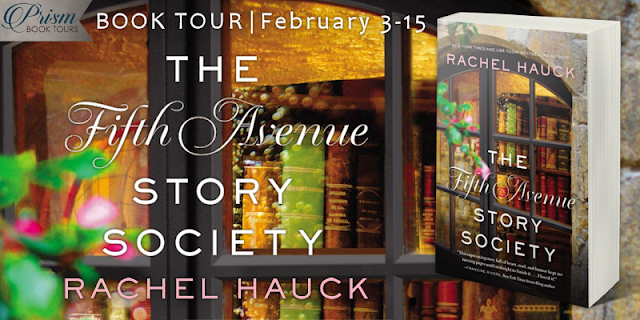 We hope you enjoyed the tour! If you missed any of the stops
you'll find snippets, as well as the link to each full post, below:


What was your motivation behind THE FIFTH AVENUE STORY SOCIETY? Why did you want to write it?

The idea came after I spoke to a local writers group. One of the leaders mentioned their "story circles" and an idea was born. The Story Circle was the original title and had seven characters instead of five. But from the beginning it was about a group of strangers discovering who they were as they told their stories. The idea hit me so profoundly I went home from the meeting and wrote a synopsis in minutes and fired it off to my agent. He wrote back, "Love it!" The story felt right. I could "see" it so I knew I had to write it.


"As always, Rachel Hauck’s character development is spot on. She created a world filled with believable characters and a story with a beautiful, spiritual thread. Wonderful storytelling. "


The door opened, and the discussion crashed to a stop. Jett rose to meet who he believed was the fifth member of this weird, cockamamie “society.”


“Lexa?” If possible, the world stopped spinning. His heartbeat slowed, and his thoughts careened together.


She moved across the threshold with ease, hitched her backpack on her shoulder, and raised her sparkling hazel gaze.


“Jett? You’ve got to be kidding me.” She had more heat in her eyes than the flames in the fireplace. “Did you do this? Send that stupid invitation?”


"This is an interesting, unique tale of how one event resulted in opening new discoveries in five individuals which changed each of their lives path forever. It is a story of freedom, unity, redirection, understanding, tolerance, acceptance, and many more topics."


“We still don’t know why we’re here.” Chuck glanced at each of them, his attention lingering longer on Coral than the others. “Don’t you want to know who sent the invitation?”


“What if the invitations were some promotional thing for the library? Sent to five random people. I get stuff ‘to the resident of’ all the time,” Lexa said, the presence of Jett starting to seep into her skin.


Did she want to punch him? Yell at him? Run away and never clap eyes on him again? Hug him? Yes, yes, all of the above.


"The story started strong and tapered off towards the middle. However, I am glad that I stuck through the novel because I love[d] seeing the true story of each character unfold. I enjoyed seeing that each character was able to find themselves and find each other."


The Power of Words - Review


"The Fifth Avenue Story Society by Rachel Hauck is a moving story that goes on my “best of the best” list. The bookstore setting is atmospheric and charming, the characters rich and endearing, and every word of the prose is to be treasured. It’s a story of friendship, renewal and second chances, with a few heartwarming moments that moved me to tears. . . . Highly recommended."


Adventures of a Travelers Wife - Review


"I give this book a resounding 5 out of 5 stars for the amazing characters and their individual stories, for the story of friendships coming from nothing, and for showing how the faith of one can affect many. I highly recommend picking this book up to read."


"Rachel Hauck is my new favourite in Contemporary INSPY . . . From the choices of her words to how she tucks in references which cross-relate to the revelations she's making about her characters; Hauck has this innate ability to connect you to her story and gives you a reason to ache for another chapter, another moment in this world she's created with a story you don't wish to exit. . . . by the time I first reached the Fifth Avenue Story Society's meeting space, I knew how much I was loving this experience . . . I was beyond smitten and dearly delighted that this became the first Hauck novel I read and it definitely will not be my last! Ooh, my dear stars... the joy of it!"


"This book is bound to be a movie at some point. The characters (and there are several) each have their own spunky personalities that need to be shared with the world. I love the contrast between them, from their backgrounds to their livelihoods."


"If you haven't read any books she's written so far than I have no hesitation in recommending you start with this one. I absolutely loved the premise and the characters . . . I thought The Fifth [Avenue] Story Society has some heartbreaking moments but also there is hope, hope for new beginnings, hope for brighter futures and best of meeting new people who will change your life for the better."


“I still say people can live selflessly, you know. There are couples who get along, don’t argue. Marriages where love conquers all.”


“Well, you’re looking at the remaining half of a solid, giving marriage.” Ed glanced around the circle. “Granted, you don’t see much of what Esmerelda and I had in these modern times. All I see here is you kids with heartbreak. I don’t know what happened to you, Chuck, but I can see pain in your eyes.” He patted his new friend’s broad shoulder. “Lord only knows what happened with Coral and you two.” He waved at Lexa, then Jett. “Esmie and I chose the way of love. It was the sixties, so naturally love was on our minds. We decided things together, and when she was right, I said sorry. When I was right, she made my favorite pot roast.” He fell against his chair. “She made the best pot roast.”


"Stepping inside The Fifth Avenue Story Society by Rachel Hauk is like stepping inside the library itself–warm, cozy, and with a bit of mystery. . . . The Fifth Avenue Story Society offers a little bit of something for every type of readers, and is a wonderful fit for those who enjoy cozy reads involving bookstores, family, and business, with maybe even a little romance."


“One day when you’re like forty or fifty, you’ll look back on your life and wonder what happened to the Jett Wilder who hoped, who dreamed. You’ll be completely unaware that your shallow, lonely existence was carved out by a faded, twisted memory of a morning on a mountaintop. That you’re haunted by the ghost of your dead brother.”


“That won’t happen. What you just said.”


“In some ways it already has, Jett. Between you and me.”


Edits and Reviews by Leslie - Review


"Hauck’s writing quickly draws the reader in, and it’s easy to feel a part of the unlikely group. Character development is strong. I loved that the story was told in multiple POV’s, as it gives the reader the full picture, and you’re really able to connect with each person. . . . I had a hard time putting this one down, as I couldn’t wait to see how things turned out in the end."


"Before you do anything else, go put this book on your TBR pile! However you keep track of the books you want to read…whether you add them to Goodreads or you write them down…do it now. You need to read The Fifth Avenue Story Society.

This is a story that you will never forget. . . . I felt this story so deeply. The characters’ stories aren’t my stories, but that’s the point. Deep down, we’re the same."


"I love Rachel's books. I love her stories and how they can be very realistic and believable!! Her writing is amazing!! She [definitely] wrapped up the ending to this story very well . . . Wonderful plot and Characters that you can believe in and some you can even make friends with."


"I found myself not being able to put it down. . . . This book was heart-breaking, frustrating, and touching to read. It even had a haunting sadness to it. Still, there were elements of hope and even some humor. . . . My heart nearly broke at one point when it looked like everything was falling apart. Yet, at the end, everything came together and in a beautiful way."


Don't forget to enter the giveaway at the end of this post... 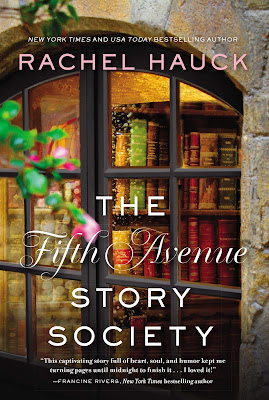 
An invitation to join The Fifth Avenue Story Society gives five New York strangers a chance to rewrite their own stories.


Executive assistant Lexa is eager for a much-deserved promotion, but her boss is determined to keep her underemployed.

Literature professor Jett is dealing with a broken heart, as well as a nagging suspicion his literary idol, Gordon Phipps Roth, might be a fraud.

Aging widower Ed is eager to write the true story of his incredible marriage.

Coral, queen of the cosmetics industry, has broken her engagement and is on the verge of losing her great grandmother’s multimillion-dollar empire.

When all five New Yorkers receive an anonymous, mysterious invitation to the Fifth Avenue Story Society, they suspect they’re victims of a practical joke. No one knows who sent the invitations or why. No one has heard of the literary society. And no one is prepared to reveal their deepest secrets to a roomful of strangers.

Yet curiosity and loneliness bring them back week after week to the old library. And it’s there they discover the stories of their hearts, and the kind of friendship and love that heals their souls.

Praise for the Book

"Hauck inspires and uplifts with this mix of tales." - Publishers Weekly 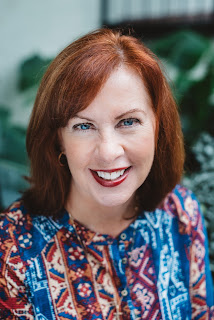 Rachel Hauck is the New York Times, Wall Street Journal, and USA TODAY bestselling author of The Wedding Dress, which was also named Inspirational Novel of the Year by Romantic Times and was a RITA finalist. Rachel lives in central Florida with her husband and pet and writes from her ivory tower. 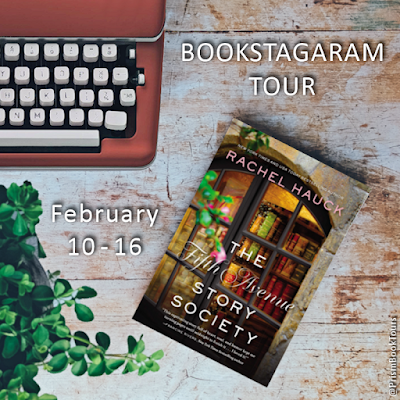 Check out the Bookstagram Tour here, which has its own giveaway (ends 2/16)! 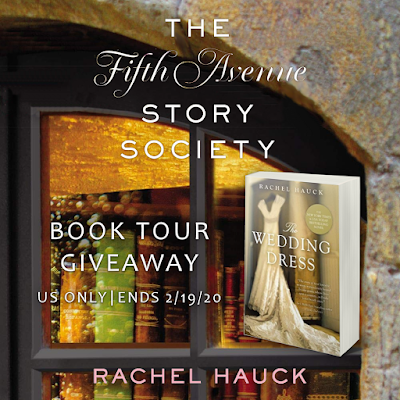 One winner will receive a print copy of The Wedding Dress (US only)
Ends February 19, 2020

Posted by Janet Greaves at 5:35 PM