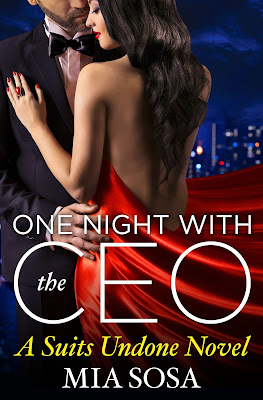 ONE NIGHT WITH THE CEO
Suits Undone Series #2
Mia Sosa
Released May 3rd, 2016
Forever Yours

After some disappointing dates, Karen Ramirez has concluded that great sex is for other people. Especially since medical school won’t leave her much time for romance anyway. Then she runs into tall, dark, charming, and ridiculously wealthy Mark Lansing—and quickly reconsiders celibacy. Adding to temptation? Mark will be the best man at her sister’s wedding and the nuptial destination is sultry Puerto Rico. Now this trip might just be sensory overload—or the perfect chance for Karen to find the groove she’s never had.

For CEO Mark Lansing, his perfect match would be smart, sweet, and funny, with long legs and silky hair the color of dark chocolate. In short, someone a lot like Karen. But Mark’s looking to settle down, while a relationship is the last thing on Karen’s mind. So Mark proposes a plan: he and Karen will use their weekend in paradise to sizzling advantage—before downshifting to friendship. The only problem? Karen is all Mark can think of when he gets home. Now his most challenging negotiation will be for the one thing money can’t buy . . .

Well, that had escalated quickly.

Mark’s mouth captured hers. She tasted salt and a hint of sweetness on his lips, a heady combination that made her moan in appreciation. She arched into him, wanting—no, needing— to feel his body against hers. He responded by snaking his hand under her hair and caressing her neck. Seconds later, he wrapped his other hand around her middle and stroked her back. Mark’s kiss promised a full-body experience, and she shivered in response to all the points of contact. Finally, he drew back, gulping in air. Oh, right. She needed to breathe. Funny how easily he made her forget a minor inconvenience like breathing.

She pressed her face against his chest and held on to the lapels of his suit jacket as she took in air. “What’s happening?”

He brushed his fingers against her hair. “I’m sorry for acting like an ass.”

She looked up at him then. “That’s your version of an apology?”

He stepped back and ran a hand through his hair. “No, that’s my version of being selfish. What I should have done was apologize for being a jerk to you. You didn’t deserve it.”

She nodded. “You’ll get no argument from me there.”

He stepped toward her and reached for her hands. “I wanted to kiss you, but I didn’t think it would be a smart move, so I took my frustration out on you.”

He dropped her hands and shoved his own in his pockets. “The kiss is harder to explain.”

“Um, unless I’m missing something, the phenomenon is called attraction. Your pheromones and my pheromones are sending chemo-signals to each other. Totally normal.”

He gave her his trademark half smile. “Totally not a good idea, either.”

She didn’t disagree with him. Doing anything with Mark didn’t figure in her plans, no matter how much he’d nearly owned her with a single kiss. “Again, you’ll get no argument from me. Still, that kiss was pretty freaking hot.”

Mark closed his eyes and raised his head to the night sky. “Stop doing that. I’m relying on you to be the voice of reason in this situation.”

Ha. That was cute. But she’d oblige him anyway, because she needed to put the kiss in its proper place: a momentary lapse in judgment not to be repeated. If she didn’t, he’d consume her thoughts, and she couldn’t afford the distraction. “Mark, look around. We’re in . You look hot. I look hot. It’s hot, period. And we’re standing in front of a garden. You hear that?”

She resisted the urge to roll her eyes. “Only one of the most important cultural symbols of .” When he stared at her blankly, she continued. “The tiny frogs, Mark. You must have seen them everywhere at the airport. T-shirts, mugs, hats, you name it. Listen.”

They faced each other in silence. “That’s their mating call,” she told him. “They’re practically begging us to lock lips. You can’t be faulted for wanting to kiss me under these circumstances.”

He bridged the distance between them. “What if I told you I’ve wanted to kiss you every single second I’ve been in your presence? Can you explain that?”

She gulped. “Well, that’s a little harder to explain.”

He pressed his hand against the back of her neck and pulled her flush against him. “And I’ve never wanted to stop at kissing. I want us to do more than that. A lot more.” 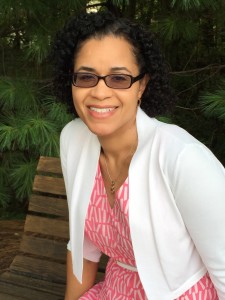 Mia Sosa is an
award-winning writer and 2015 Romance Writers of America® Golden Heart®
Finalist. She writes contemporary romances that are funny, flirty, and a little
dirty. Ahem. Her first book, Unbuttoning the CEO, was published by Grand
Central Publishing in December 2015 and garnered a starred review from Library
Journal, which called it “a sparkling romance debut.”

Although
Mia once dreamed of being a professional singer, practical considerations
(read: the need to generate income) led her to take the law school admissions
test instead. She practiced First Amendment and media law in the nation's
capital for ten years before returning to her creative roots. Now she spends
most of her days writing love stories about smart women and the complicated men
who love them. Okay, let's be real here: Mia wears PJs all day and watches more
reality television than a network television censor--all in the name of
research, of course. She lives in Maryland with her husband and two daughters
and will forever be on the hunt for the perfect karaoke bar.

Mia is
represented by Sarah E. Younger of the Nancy Yost Literary Agency.

Don't Miss the First Title in the Series