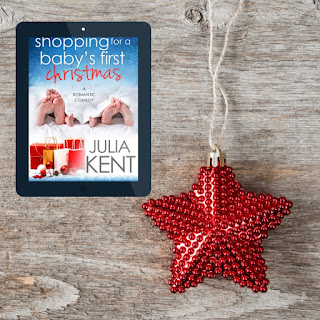 My mother wants all her kids and grandkids to spend Christmas Eve at her house and wake up on Christmas morning together.

And it would be.

If it weren’t my mother.

My husband, Declan, is protesting any involvement, though he’s openly intrigued by the idea of claiming his territory by suggesting we have sex in my childhood bed.

And by ‘suggest,’ I mean make a series of really hot offers that make me whimper when I have to say no.

Wait – why am I saying no again?

Mom has turned her house into a Christmas showcase that makes Frankenmuth look like the picked-over clearance rack at Target on December 26. You know those crazy people on Etsy who make felted gnomes out of belly button lint and use … a certain kind of hair… to make thatched roofs on little decorative elf homes?

Those people are saner than my mother.

There is no force of nature stronger — and more emotionally volatile — than a fifty-something grandmother determined to create holiday memories.

Wait a minute. Maybe there is. 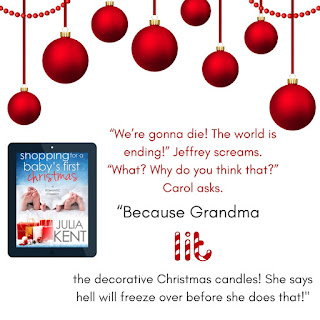 New York Times and USA Today Bestselling Author Julia Kent writes romantic comedy with an edge. From billionaires to BBWs to new adult rock stars, Julia finds a sensual, goofy joy in every contemporary romance she writes. Unlike Shannon from Shopping for a Billionaire, she did not meet her husband after dropping her phone in a men's room toilet (and he isn't a billionaire). She lives in New England with her husband and three sons in a household where the toilet seat is never, ever, down 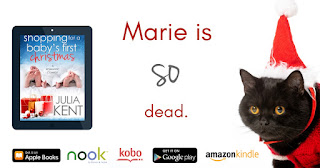 “Here,” I say, shaking the shirt free of cat hair. “Sounds like someone's getting ready for carols.” A few piano notes drift up the stairs.
“Carol's already here,” Dec replies as he sets Ellie down on hands and knees. She promptly crawls over to the trash can, which is, thankfully, empty.
“Not Carol. Carols. Christmas carols.”
He freezes, arms up in the sleeves, about to pull the shirt over his head. Ah, what a pose. The fire downstairs isn't the only thing heating up in this house right now.
“We have to sing?”
“Of course! It's tradition!”
Ellie knocks the trash can over and claps for herself, looking at us as if to say, See what I did? Give me my gold medal.
Flesh show over, Declan finishes pulling on his shirt. I burst into laughter at the vision of my husband in horizontal green and white stripes, green piping around the neck and cuffs of his pjs. I'm in red and white, and so is Ellie, with a big white snowflake on her butt.
“What's so funny?”
“You look like a piece of hard candy.”
He grabs my hand and puts it on his crotch. “I could give you something to lick.”
“DEC! Not in front of the baby!” 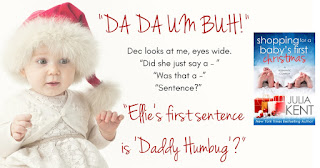 Release blitz organized by Writer Marketing Services
Posted by Janet Greaves at 10:34 AM