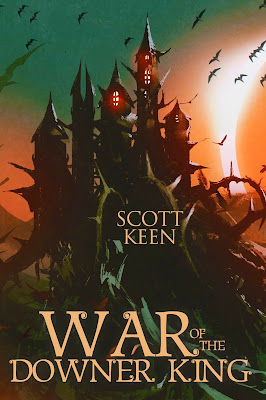 
Now that Crik and the Downers, once-slaves of Ungstah, have arrived safely in the village of Arined, they can breathe freely for the first time in their short lives.However, unbeknownst to them, the specter of Sulfus the gaunt king and the witch of Ungstah looms over their new home, the last vestige of safety in the Northern Reaches.Meanwhile, in Ungstah, Durgan, former Captain of the Watch, and those left behind, prepare for their final assault against Sulfus, knowing his fall is their only way to freedom. But as each day passes and lives are lost, the uprising begins to falter.Aniel, a messenger from the Eastern lands, knows that time is running out as she searches through the dark past of an ancient king in the hope of finding a clue to the mysterious origins of Sulfus and the King’s Eyes.How long can Crik and his companions hide from Sulfus and the King’s Eyes? Will Durgan and the Branded have the strength to topple a throne? What secrets will Aniel find? Will it be enough to overthrow a king and free the Downers once and for all?It all began with a child. It will only end with a war. 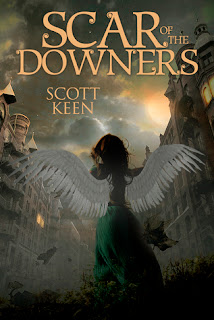 Branded on the slaves in the Northern Reaches beyond Ungstah, the scar marks each one as a Downer. It is who they are. There is no escaping this world. Still, strange things are stirring.Two foreigners ride through the Northern Reaches on a secret mission. An unknown cloaked figure wanders the streets of the dark city of Ungstah. What they want no one can be sure, but it all centers around a Downer named Crik.Crik, too scared to seek freedom, spends his days working in his master’s store, avoiding the spirit-eating Ash Kings, and scavenging food for himself and his best friend, Jak. Until he steals from the wrong person. When Jak is sold to satisfy the debt, Crik burns down his master’s house and is sentenced to death.To survive, Crik and his friends must leave behind their life of slavery to do what no other Downer has ever done before – escape from the city of Ungstah. 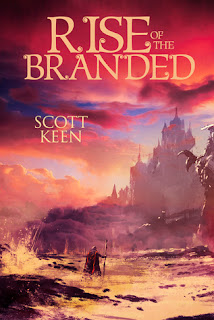 Rise of the Branded (Scar of the Downers #2)
Release Date: November 2016

Pursued into the wild by the soldiers of Ungstah, former slave Crik and the other freed Downers encounter the magical and terrifying nature of their world. They face spectral Shepherds, man-eating Rukmush, and the ancient giants of the earth. When two of their group are captured, Crik is distraught and powerless.Meanwhile back in the city, Durgan, former Captain of the King’s Guard who allowed Crik and his friends to escape from Ungstah, is now a Downer, one of the Branded. Amid the murmurings of an uprising among the Branded, Durgan just wants to be left alone to search for his missing son. But in the process, he discovers how dark the powers of Sulfus the king truly are. Durgan must take a stand in the coming war between the Branded and the powerful armies of Sulfus.To kill any hope of escape for the city’s Branded, the army comes after Crik and his friends to make an example of them. The answers for Durgan, Crik and freedom for all Downers lie hidden in the dark recesses of the Northern Reaches, in the treacherous places Crik and his companions are about to enter.

Excerpt
Sulfus’s throne room glowed in the
light of the red lamps that burned on the dais. The withered king stared,
expressionless, with his hollowed-out eyes in the direction of the closed
chamber doors, his long, white beard unfolded out before him along the floor. A
brown and blood-red carpet extended from the dais to the doors, and standing
motionless alongside it, beside the massive throne room pillars, were Draugers,
their orange eyes radiant against their deep blue skin and gray helmets.
Creeeeak.
The chamber doors opened and in
walked a lone, hunch-backed figure, whose body and overlarged shoulder blades
were covered by a cloak that dragged along the floor behind her. She was small,
ant-like, compared to the massive size of the ceiling and pillars. This was the
King’s Eyes, as she called herself, and she watched over her son’s throne,
seeing what no one else could see.
“Welcome, Mother,” announced the
echoic voice from the throne. “The soldiers have assembled in the square and
are awaiting their orders.”
“Have any of the other cities
responded?” The old woman’s voice quivered as she spoke, but it wasn’t out of
fear or weakness. A cold, strong power weaved through her words.
“Yes,” said Sulfus. The king’s beard
snaked down the steps of the dais. His skin was ashen, ghostly, and draped
loosely over his bones. His cheeks were sunken and made his hollowed-out eyes
appear as two pits opening into an abyss. “Soldiers from Dul Urith and the
Fortresses of Koba and Noth have assembled. They are ready to march on our
orders. Felastah and The Horn City are gathering soldiers as we speak. When
they are ready, they will send soldiers north to reinforce the Last Outpost.
The Urgog have also agreed to help our cause. We, however, have not heard from
Eluthia, the Island City.”
“Send the messenger birds again,”
hissed the King’s Eyes. “Warn them that if they do not respond swiftly, they
will be seen as enemies of the throne. We will send the might of the Northern
Reaches against them. And for those who have answered our call, tell them that
I will bless them.”
“What, may I ask, is your final
plan? Our first contingent of soldiers have been wiped out. These Downers are
obviously stronger than we first thought.”
“They are not stronger than I
thought at all,” snarled the King’s Eyes. “Don’t speak such foolishness. It is
only by chance that they stumbled across that old hermit. But like all beings
in this land, he will soon slink back into his hole. If he has not stretched
out his hand to help the Downers before, he will not do it now. They will not
stay there. No, they are on their own once again.”
“But where are they going?” asked
Sulfus. “How will you find them?”
“Do you forget that I am your eyes?”
Her voice was sickly sweet, as if she tried to sound caring. “I see what you
cannot, and I have others seeing what I cannot. My eyes are everywhere.”
The old woman lifted her arm into
the air. A sudden squawk echoed in the throne room as a horned crow swooped in
from the open window and landed on the witch’s arm. The bird’s red, beady eyes
were filled with malevolence. It gave another piercing squawk. The King’s Eyes
climbed up the stairs of the dais and stood next to the throne of bones, the
crow still perched on her arm.
“It seems that our spies have
observed the agitators entering the Bleak Hills. That is where they must be
hiding. It is one of the overlooked regions of the Northern Reaches.” The old
woman jerked her arm upward and sent the bird fluttering to one of the beams in
the ceiling where it perched. “But I assure you, it won’t be any longer.”
“A veil hangs across those hills,”
said Sulfus. “We cannot see clearly what lies behind it. It is clouded.”
“That is why we will enter into it
and hunt them down.”
“I fear that it won’t make it any
easier,” said Sulfus. “There is a reason we have overlooked those hills. A
magic lies about it that won’t be easily overcome.”
“Don’t
doubt, my son.” Her voice sounded amused. “We will find their home and burn it
to the ground.” She withdrew the hood of her cloak off her head, revealing her
scaly, hairless scalp.

About the Author
Scott is married and has four daughters. He has an MFA in Script and Screenwriting and is adjunct assistant professor. He is also the author of three young adult fantasy novels, Scar of the Downers, Rise of the Branded, and, the final installment of the series, War of the Downer King.