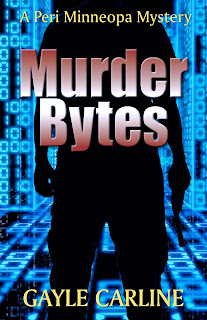 In Murder Bytes, 50-year-old private investigator, Peri Minneopa has had enough. She’s closing her business, marrying her detective boyfriend, and settling down to a life of ease–until her brother shows up, accused of a murder he swears he didn’t commit. Now she’s back in the thick of things, investigating the death of an engineer who may have been stealing techno-secrets from other companies. Her relationship with her brother is an icy one, at best, and she struggles with her ambivalence, as well as her desire to leave investigative work behind. Digging around in people’s lives is reasonably easy, but when the bullets start flying, will Peri be able to keep her promise?

“The regular gang is all back for Murder Bytes,” said Carline. “At the end of A More Deadly Union, Peri had decided to close her P.I. business and retire. In this story, she’s trying to do just that, but her older brother needs her investigative skills to find out who is trying to frame him for murder. The police would rather close the book and let the courts handle it, so Peri must convince the detectives and Chief Fletcher to keep digging. She, of course, gets a little help from her friends.”
Book Life calls Murder Bytes an “entertaining mystery … perfect for readers who appreciate a funny and courageous heroine” and finds it “great for fans of Anne George’s Southern Sisters series and Sue Grafton.” 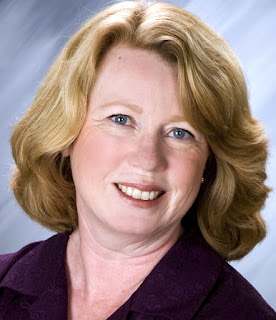 a typical Californian, meaning that she was born somewhere else. She moved to Orange County from Illinois in 1978 and landed in Placentia a few years later. Carline began writing journalistic pieces for California Riding Magazine, then quickly added the title “humor columnist" to her resume with a weekly column in her local newspaper, the Placentia News-Times. What she really wanted to do was write mysteries, however, so in 2009 she crossed that off her list with the first of her Peri Minneopa mysteries. In her spare time, Carline likes to sit down with friends and laugh over a glass of wine. And maybe plan a little murder and mayhem for the next novel.

For more information on the author or Murder Bytes, please visit www.gaylecarline.com

1. Murder Bytes is your fifth Peri Minneopa mystery. What can you tell us about Peri, and how does this book continue the traditions established by the other novels in the series?

“In the last book, A More Deadly Union, Peri was left traumatized after solving the case. In the latest story, she just wants to stop investigating crime, settle down, and marry her longtime boyfriend. Unfortunately, that’s not the way her life works. Her brother needs her help, to prove he did not commit murder. She is reluctant to help him, both because she is still feeling the trauma of the last case and because her brother does not want any kind of relationship with her—he is only using her to get out of trouble. To me, it is a classic question of the thickness of blood and water, and how much you are willing to go to bat for ‘that relative.’”

2. In Murder Bytes, Peri re-opens her practice to help her estranged brother. What keeps Peri from simply referring him to another qualified detective?
“At the end of the day, Dev is her big brother. She wants to believe that he considers her his little sister, that someday, somehow, he will realize his familial love for her. There’s a piece of advice, to ‘raise the child you have and not the one you want.’ In Peri’s case, she wants the brother who wants to be close to her, and has a hard time accepting the brother that he is.”

3. Peri’s boyfriend, Detective Skip Carlton, is now her official fiancé. They have bought a home together, and are selling their houses. Because Peri’s house sold and Skip’s is still on the market, she is living in the new place while it’s being remodeled. How is this affecting their relationship?

“The continual stream of workers and noise in their house has Peri’s stress dialed up to 11, on top of her PTSD. It creates conflict for them, in that he wants to defer remodeling decisions to her, so that she will be happy, and she would like him more involved, to take the pressure off. In addition, he wants to help her with her brother’s problem, but would like her to just sit on the sidelines and watch—something she’s never been good at.”

4. There are a number of familiar characters in Murder Bytes that readers will recognize from the earlier novels in the series. Who are your personal favorites, and what happens to them in this particular story?

“I like them all, for individual reasons. Blanche is always Peri’s rock as her BFF, and I appreciate her good advice. I admire Police Chief Fletcher—he is the right man for the job. Of course, Benny Needles will always be my favorite. In this book, he gets his own chapters, and even has a ‘special friend.’ He and Peri have a lot of warm, connecting moments, and I’m very pleased with his growth.”

5. Murder Bytes takes place in Southern California, in the Orange County area. How integral is this setting to the Peri Minneopa mysteries, and why did you place the series in this environment?

“When I started this series, I wanted a small town feel, but not so small that I wouldn’t kill off all the residents! They say to write what you know, and I know Southern California. My hometown of Placentia has a very small-town feel, even though it is locked into the vast Orange County. That made it perfect—nonresidents are constantly coming in and out of town, giving my stories lots of victims. Plus, I’m very proud to live in Placentia (we sometimes call it P-Town). I might as well do my part to put it on the map.”

6. Are you working on another Peri Minneopa mystery? If so, what can you tell us about it?

“I am advertising this as the fifth and final installment of Peri Minneopa Mysteries. I think I’ve taken her to a place where the next book would be such a completely different flavor, it will have to be a new series of mysteries. Don’t worry—I’ll start writing them! In the meantime, I have a sequel to my romantic suspense, Murder on the Hoof, to write.”