Don’t miss this intriguing and climactic conclusion to the Blur Trilogy.
As Daniel Byers prepares to attend a basketball camp before his senior year of high school, the terrifying blurs that’ve plagued him for the last nine months return.
Dark images begin to haunt him—creatures crawling from the deepest pits of his nightmares, glimmers of chilling memories from his early childhood. But before he can unearth the meaning behind his mysterious hallucinations, Daniel must team up with two other extraordinary teens to save a young woman who has been abducted by a scientist obsessed with enacting his own warped form of justice.
This atmospheric mystery picks up where Fury left off and takes readers into the uncharted regions where reality and madness intertwine.

He and his team had made great strides in the last couple of years, but the loss of the research facility in northern Wisconsin last December had slowed things down—that is, until they located this old hotel here in this remote part of eastern Tennessee.

Actually, the site was ideal. It was isolated and lay at the end of a one-lane road that had hardly been used in years.

Back in the 1950s when a new highway was built that wrapped around the other side of the mountain, it took the tourists and other businesses with it. The hotel owners went bankrupt and the property went into foreclosure.

Rumored to be haunted, the Estoria Inn had sat empty for decades and was being reclaimed by the forest when Adrian and his team started renovations. Most people, even those in the nearby towns, had forgotten that this place even existed.

And none of them knew what kind of research was happening there now.

Which was probably a good thing.

Fortuitously, the Estoria was also less than an hour drive for the hypnotherapist Adrian sometimes brought up to implant suggestions in the minds of his subjects after they’d been put into a deep trance.

When you pay a hypnotist enough, you can get him to implant any suggestions that you want.

Despair. Depression. Loneliness. They can all be the tools you use in the service of the

We’re on our phones searching Internet news sites for recent obituaries when the X-ray results come back.

The ankle is only sprained. The shoulder will recover. It won’t be ideal for the basketball camp, but at least it’s not my shooting arm.

The doctor gives me a sling to keep the shoulder in place, then explains what I already know: It’s going to be very sore for a while and I’ll run the risk of it coming out of its socket again unless I’m careful. “You’ll need to keep your arm in that sling for the next four to six weeks.”

“Okay. Thanks,” I say, but I know that’s not going to happen.

This camp is a huge deal and missing it isn’t an option. At least a dozen Division I coaches will be there recruiting players and it’s my best chance to get the attention I need for a scholarship offer.

Although I’ve had some interest from a few Big Ten football coaches, honestly, I’d rather play college basket- ball. Way fewer injuries. Less time lifting and more time actually playing. Besides, I don’t really have the size for col- lege football—not to mention my mom worrying about me less, which is a bonus.

While the doctor calls Dad to bring him up to speed and also get permission to give me some pain medication, I touch base with Mom to make sure she knows I’m alright. I decide that it’ll be best to explain about the blur in person, so I don’t bring it up.

Finally, the doctor hands me the meds, along with a prescription.

On their way to see me at the hospital, Kyle had picked up Nicole from her place, so now we swing by to get my car from the road out by the lake where I left it earlier.

Somehow, the logging company has managed to get the logs far enough to one side to allow cars to get past.

Being here brings everything back again and I can’t tell if it’s just my imagination, but my shoulder seems to throb more as I remember what it was like to get hit by that truck.

My attention shifting from one thing to the next. That slipstream again. All those unnoticed slivers of reality curling right past me.

But now, the ones branded with pain are coming to the forefront.

I ride with Nicole, who drives my car so I can rest my shoulder. Kyle follows us back to my house in his vintage Mustang. Even though it’s late, we search online again for a little

while, but we still can’t find anything about kids who’ve recently died—at least not any that match the age of the boy in the road.

He might not have died recently. After all, the girl I saw burn up in my blur back in December had actually died in the 1930s.

As it turned out, I’d learned about her story and seen her picture years ago when I was nine. Then, just before Christmas, my mind threaded some clues together and showed me what it might have looked like when the lantern she was standing next to caught fire to her nightgown and ended up taking her life.

I’d forgotten all about her.

When the memory came back, it brought a flood of other grisly images with it because the day I first saw her photo I’d been present when a killer struck, but I’d blocked it out.

They say trauma can do that, that it can rip the fabric between your conscious and your subconscious mind.

My problem is that the rip keeps getting bigger.

My friends get word from their parents that they need to take off and I tell them goodnight.

“See you tomorrow?” Nicole says. “Yeah.” I give her a quick kiss. “Kiss me and I’ll dislocate your other shoulder,” Kyle tells me. Then he taps a finger thoughtfully against the air. “But at least then you wouldn’t notice the first one so much. So there is that.”

“Thanks, but no thanks.” “Okay, so before I go, I’ve got one for you.” “You’ve got one?” “A riddle: I’m twice as old as I used to be when I was half as young as I am now. How old am I?” For months he’s been trying to trick me with math or logic problems. Doesn’t always work out so well. “That one’s easy. It would be whatever age you are, so you’re the same as me. Seventeen.” “Yes. And I’m seriously glad you’re still seventeen and not dead.” “Yeah.”

A little while after they leave, Dad comes home and checks on me.

“I’m good,” I tell him. “Anything serious with that call?” “Call?” “The dispatch code. I heard it at the hospital. Was it a suicide?”

“Scarlett Cordova accidentally overdosed on some over the counter drugs.”

Scarlett is a year behind me at school. “Is she alright?” “She will be. Gave everyone a scare, though.” “How do they know?” He looks at me curiously. “How do they know what?” “You said she accidentally OD’ed. How do they know it was an accident?” “There were three other kids there with her when it happened. It was during some kind of drinking game. Her parents were gone. Good thing she’s alright. Lucky girl.”

After telling me one more time how thankful he is that I’m okay, he heads to his room and I climb into bed, hoping that even with the aching shoulder I’ll be able to get some rest.

Instead, I find myself caught up thinking about who that boy might have been and what the blur might mean.

He’d reached out to me, just like the girls in my earlier blurs had done.

It’d been too late to save them.

Maybe if we were lucky one more time, it wouldn’t be too late to save him. 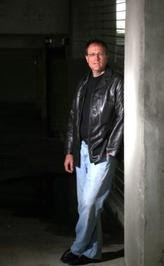 Author Bio:
Best known for his high-octane thrillers, Steven James is the award-winning author of eleven suspense novels. The Blur Trilogy is his first mystery series for teens. Steven has taught creative writing around the world and loves rock climbing, science fiction movies, and chicken fajitas. Find him at www.stevenjames.net.