The Duke I Tempted - Secrets of Charlotte Street: Book One by Scarlett Peckham

“She intended to be the mistress of her own fate. And there was one thing she knew with absolute certainty from observing the ways of the world: one did not get that kind of power by marrying it.”

THE DUKE I TEMPTED by Scarlett Peckham is out this July!

About THE DUKE I TEMPTED 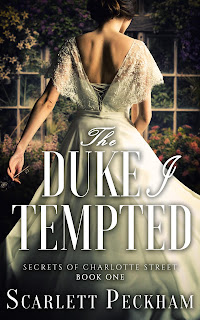 Having overcome financial ruin and redeemed his family name to become the most legendary investor in London, the Duke of Westmead needs to secure his holdings by producing an heir. Which means he must find a wife who won’t discover his secret craving to spend his nights on his knees—or make demands on his long scarred-over heart.

Poppy Cavendish is not that type of woman. An ambitious self-taught botanist designing the garden ballroom in which Westmead plans to woo a bride, Poppy has struggled against convention all her life to secure her hard-won independence. She wants the capital to expand her exotic nursery business—not a husband.

But there is something so compelling about Westmead, with his starchy bearing and impossibly kind eyes—that when an accidental scandal makes marriage to the duke the only means to save her nursery, Poppy worries she wants more than the title he is offering. The arrangement is meant to be just business. A greenhouse for an heir. But Poppy yearns to unravel her husband’s secrets—and to tempt the duke to risk his heart.

Add THE DUKE I TEMPTED to your TBR pile on Goodreads!

Check out the book trailer for THE DUKE I TEMPTED!
https://www.youtube.com/watch?v=__XlVV0KVUA&feature=youtu.be

Read and exclusive excerpt from THE DUKE I TEMPTED:

The Duke of Westmead cleared his throat. “Given I rebuked you for your lack of transparency, Miss Cavendish, honor obliges I disclose to you that I became rather dismayed when I learned you were betrothed. I suppose I thought, how dare she? How dare she squander her gifts on so middling a creature as Mr. Raridan? Or, more to the point, on anyone?”
Poppy didn’t speak. She couldn’t, because her breath was caught. She had never heard herself described in such terms by anyone. How could she, when the local gentry who had known her all her life told a different story about her? One of an eccentric spinster who coarsened herself with commercial enterprise. An arrogant, unlikeable woman, unhealthily obsessed with plants.
“Thank you,” she said, hoping her voice did not convey how deeply what he said affected her. It would not do to seem overly moved.
He shrugged, as though his words were unremarkable. As though such assessments of her worth were lobbed at her all day.
The carriage she had been waiting for at long last appeared through the stable gates and rolled up to the bottom of the steps.
“Miss Cavendish, in light of my lapse of judgment, I fully understand if you do not wish to return to Westhaven. But if my sister believes me guilty of ruining her plans I shall have to live with her mortal disapproval. I don’t suppose I could prevail on you to reconsider finishing your work? I assure you that I will not attempt to intercede in so much as the placement of a vase.”
The contours of his face should not have a say in her decision and yet she could not help but admire them, as the fading light danced across the planes that made him sometimes handsome, sometimes fierce.
Or perhaps it was only the way that he looked at her. As if her respect meant something to him. As if she did.
“Very well,” she said. “I shall return in the morning. For Lady Constance’s sake.”
After just a beat too long, he nodded. “I’m glad to hear it. For Lady Constance’s sake.”
And then he smiled.
Boyishly and quick and warm, like the sun darting out from a bank of clouds. It was so unexpected and disarming that without thinking, she craned her face towards his to get a better view of it. Their eyes met, and a chill ran down her spine. Because for just a moment, she thought he might lean in, close the distance, and kiss her.
No. Not thought he might. Wanted him to.
She wanted him to kiss her.
Instead, he folded his mouth back into its usual grim line, bent in a deep bow and offered her his hand to help her into the carriage.
But it did not escape her notice that he held her fingers just a beat too long as he said: “Be well, Miss Cavendish.”

Scarlett Peckham fell in love with romance novels as a child, sneaking paperbacks from the stash in her grandmother's closet. By the time she came of age she had exhausted her library's supply and begun to dream of writing one of her own.

Scarlett studied English at Columbia University and built a career in communications, but in her free hours always returned to her earliest obsession: those delicious, big-hearted books you devour in the dark and can never bear to put down. Her steamy historical romances about alpha heroines have been finalists for the Golden Heart® Award four times. Her debut book, THE DUKE I TEMPTED, will be out July 31, 2018.

Scarlett splits her time between London and Los Angeles. When not reading or writing romance she enjoys pretending to know about wine, discussing The Real Housewives, and cooking enormous pots of soup.

Scarlett is represented by Sarah Younger at the Nancy Yost Literary Agency, and spends far too much time on Instagram and Twitter.