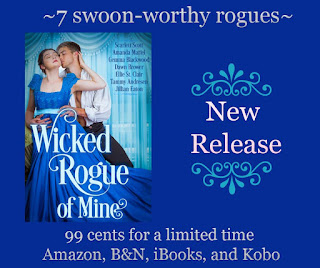 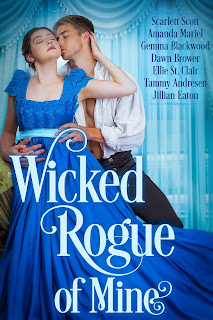 Seven swoon worthy historical romances in one must read collection:

Lord of Pirates by Scarlett Scott

When a dangerous-looking stranger raps on Lizzie Winstead's door one stormy night, the peace of her humdrum life is shattered. She's shocked to discover her visitor is Captain Edmond Grey, one of the most feared pirates of the realm and her lost love. Edmond is a wanted man throughout the Colonies, but despite his formidable reputation, he desperately needs help to nurse his wounded brother back to health. Only Lizzie can be trusted not to turn Edmond over to authorities for the price on his head. Is the love they once shared strong enough to reunite them forever and conquer the demons of Edmond's past?

Sparks fly as the Duke of Goldstone and Lady Amelia find themselves at odds with each other and drawn to each other at the same time. Can they find a way to stop arguing long enough to explore their growing passion?

The last thing Grace Rivers expects when she is sent to the country in disgrace is to receive a proposal from a handsome young army officer she hasn't seen in years. Captain Charles Everly's motive is far from romantic – his object is her inheritance: the beautiful country house that was his childhood home. As unexpected feelings develop between them, Grace's past and Charlie's rash actions throw everything they hold dear into peril. They must each decide which they value more: their childhood dreams, their damaged reputations, or their newfound love.

Searching for my Rogue by Dawn Brower

Alys Dewitt has always dreamed of finding her very own happily-ever-after, but she never would have envisioned the path she'd have to fall down to find him. James Kendall, the Duke of Weston returns from war to find an injured woman on his estate. She mumbles strange phrases and keeps calling him by another name. Thinking her a bit mad from her wounds, he takes her to the manor and calls for a doctor. As days goes by they are drawn to each other. If they're brave enough they'll discover a love that defies time.

When the life of his brother, the Duke of Elenford, is threatened, Lord Andrew Stephens must determine which of his enemies intends him harm. When Andrew takes the Duke's place at a masquerade ball, he meets a woman who takes his breath away and haunts his dreams. Arabella Marley's father gambled away their family's most precious heirloom and is determined she will gain it back for him, no matter the cost. He presents her to the man believed to be the Duke at a masquerade ball, and she is shocked to find him both handsome and agreeable. She must guard herself against his charms to find her family inheritance and keep her heart intact. Can Andrew and Arabella fight the love that grows between them, or will the truth be too much to overcome?

My Enemy, My Earl by Tammy Andresen

Fleeing London, and scandal, Lady Clarissa Burton runs directly into the wife-hunting Earl of Dumfries while travelling on a rutted Scottish road. She wanted peace in Scotland, not a tall and brooding laird who makes her forget that handsome lords are nothing but trouble.

A Most Inconvenient Love by Jillian Eaton

Rough and common, Aiden Donovan is the exact opposite of Evie's boring-as-lint fiance. But from the first moment they bump into one another on a crowded street, she finds herself utterly captivated by his dark roguish charm. As the day to her wedding draws closer, will Evie listen to her head? Or for the first time in her life will she risk everything to follow her heart?

First paragraph excerpt from each novella:
Lord of Pirates by Scarlett Scott
Edmond Grey knew he damn well didn’t want to be a baker. Apprenticed from the time he was but a lad, he’d grown weary of flour, of baking buns, of never leaving the tedious life of shopkeeper. He’d finally settled upon the path that would lead him far away.

Scandalous Endeavors by Amanda Mariel
Amelia stood as still as a hollowed out tree as drizzle coated her body in cool little beads. Dark clouds hung stationary overhead. Water spattered into a small, deep hole carved out of the rain-soaked ground. She surveyed the surrounding landscape speckled with memorial stones and decorated in wilted flowers. Why?

Grace Captures the Captain by Gemma Blackwood
“Blast that scoundrel’s eyes!” cried Captain Charles Everly, rising to his feet. “I’ll call him out this instant!”
“Now, Charlie,” said his sister, affecting the most soothing tone she could manage. “That is uncalled-for, and you know it.”
Mrs Alison Henshaw, who was born Alison Everly, had only had a matter of hours to grow accustomed to the change in her brother. He had joined the army a big-hearted boy of twenty-one. This grown man who had returned from the war that morning was bearded, rash, and angry. He was no longer the sweet Charlie she thought she knew.

Searching for my Rogue by Dawn Brower
“Aly, have you seen my shoes?”
Alys Dewitt rolled her eyes. “Did you check under the bed?” Her younger sister, Regina, was constantly losing something. They both sat in Regina’s chamber wearing their undergarments covered by a silk robe. If it wasn’t one thing, her sister would make something up so the attention would fall back to where she believed it belonged—on her.

Unmasking a Duke by Ellie St. Clair
“I am not sure I agree with this,” Elias Stephens, the Duke of Elenford murmured with a frown. “The whole idea seems quite ridiculous.”
Lord Andrew Stephens, brother to the Duke, sighed in frustration as he attempted to convince his brother to do as he suggested. It had always been something of an impossible task, given that they were both as stubborn as mules. “Elenford, be reasonable. If there truly is someone attempting to harm you — perhaps even kill you,” he exclaimed, “then it is best you go into hiding for a time. We need to ascertain exactly where these threats are coming from.” And perhaps if you are gone for a time, without the ability to do further harm, they will stop entirely, he thought, though he didn’t voice his words aloud.

My Enemy, My Earl by Tammy Andresen
Lord Ewan McDougal, Earl of Dumfries, took a deep breath of Scottish air as he trotted down the rutted road toward Kirkcaldy. It was so good to be back in his home country. Even with the misting rain, the fresh smell of spring flowers lifted his spirits. With any luck, he’d never step foot on soil that wasn’t Scottish again.

A Most Inconvenient Love by Jillian Eaton
Genevieve knew she was beautiful. She knew it in the same way she knew it was raining outside and whenever Uncle Rigby came for dinner he would be half foxed and far too handsy for his own good. Her beauty was a fact, not an opinion. A fact she had been living with for her entire life. 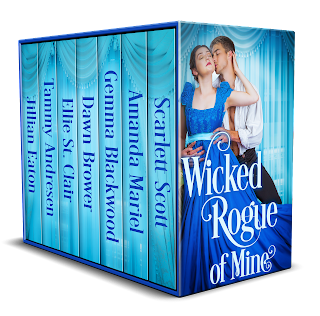 Learn more about the authors: