Today we have the blog tour for Yours Since Yesterday by Jennifer Bernard! Check out this great romance and be sure to grab your copy today! 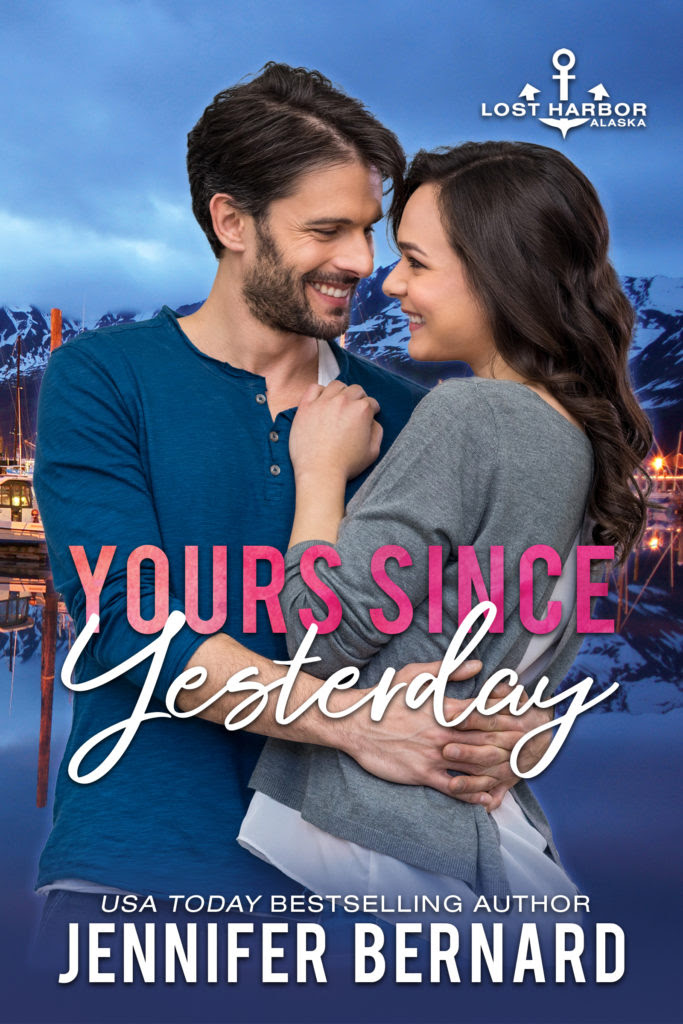 Title: Yours Since Yesterday

About Yours Since Yesterday:

Once they were best friends. Now they’re from two different worlds.

Zoe Bellini’s world exploded the second she kissed her best friend…and not in a good way. Every teen dream came crashing down when Padric was whisked away from Alaska, and her luck hasn’t improved in the last fifteen years. In fact, the pizza shop owner’s terrible track record with men has become a local legend. She doesn’t expect it to change when Padric—now a world-famous rock star—sails back into town. It’s not like they can just pick up where they left off…but her traitorous body sure wants to try.

Padric Jeffers never expected to return to his hometown of Lost Harbor, Alaska—not after the scandal that sent his family fleeing. But a mysterious letter with a warning about his childhood friend Zoe? That has him postponing his tour and hopping on the next flight north. Zoe’s been on his mind and in his lyrics since he left her behind, and once he sets eyes on the stunning grown-up version of his best friend, his mission is clear: do whatever it takes to have her—and keep her—this time around.

Easier said than done, since not everyone in town is excited about Padric’s return. And someone will do anything it takes to get rid of him. Can a pizza maker and a rock star overcome their history—not to mention scandals, angsty fans and unexpected danger—and find their way back to love?

A standalone novel in the Lost Harbor, Alaska series.

Catch Up on the Series:

When Padric rolled down her sock, Zoe shivered again. His touch was so impossibly gentle. His hands were strong and tough from working on his dad’s boat, but somehow he managed not to hurt her at all as he probed her ankle.

“Hand me my pack. I have a first-aid kit with one of those ice packs that you crack to make it cold.” She was working hard to come off as purely practical. It was hard because the energy shimmering between them made her light-headed.

He opened up her pack and found the first-aid kit her mother had insisted she bring. “Props to your mom. How’d she know we’d need medical help in the first ten minutes?”

“She always thinks the worst is going to happen.”

Padric was peering farther into her pack. “Does she think we might get stranded for a year?”

She giggled as she cracked the quick-freeze ice pack. Mom had loaded her pack with last night’s spanakopita, an entire bag of cooked sausages, a two-pound hunk of cheese, homemade baklava and a few more goodies. “You know how the Bellini family is about food. There’s a reason we own a pizza shop.”

“I’m not complaining,” he said devoutly as he handed her a piece of baklava. “Here, want a bit to distract you from your pain?”

“Sure.” She accepted the baklava while he took the ice pack.

Very carefully, he placed it around her ankle and tugged her sock up to keep it in place. The cold immediately soothed the painful throbbing.

“Excellent work, doctor. I can pay you in dessert,” she teased.

Sitting back on his heels, Padric opened his mouth so she could pop the baklava onto his tongue.

They both savored the honey-drenched, flaky phyllo as it melted on their tongues. “That’s the most incredible thing I’ve ever tasted,” he moaned. “What is that?”

And for some reason, those words filled her with a sense of power. Often she felt embarrassed by her family—so loud, so food-focused, so dark and curly, so hairy. But right now, looking at Padric as he swallowed down her mother’s baklava, she felt like a queen.

So she leaned forward and pressed her lips against his.

She tasted honey and the eagerness of a boy. After a moment of surprise, he kissed her back, clumsily, lips bumping against her teeth. It took them a moment, but then they figured out how to fit together, how if they slowed down and opened their mouths just a little bit, lips could pillow against lips and tongue touching tongue could send electric shocks along their skin.

She didn’t know how long the kiss lasted. It might have been just a few moments or it could have been much longer. She wasn’t paying attention to the passage of time at all. Her entire focus was on the exciting sensations somersaulting through her, and the sense of having stepped through a veil into a new world.

She was kissing Padric Jeffers—her best friend, her favorite person in the world. KISSING HIM. What did it mean? What would happen next?


Check out the trailer for Yours Since Yesterday:

Yours Since Yesterday Trailier from Jennifer Bernard on Vimeo. 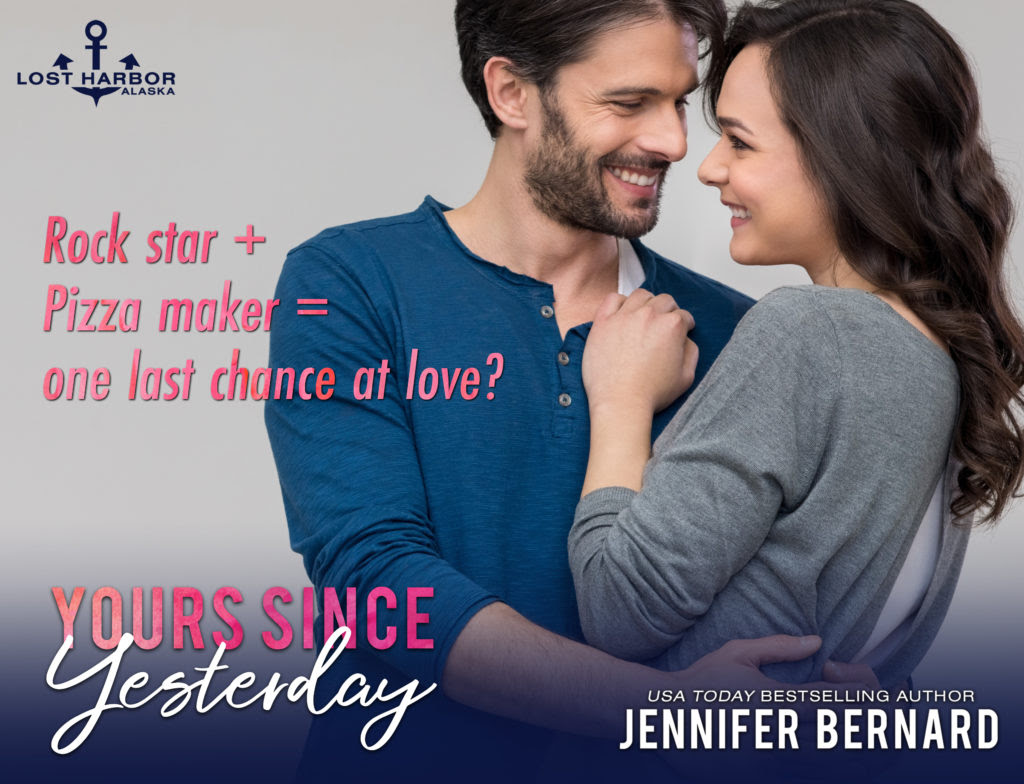 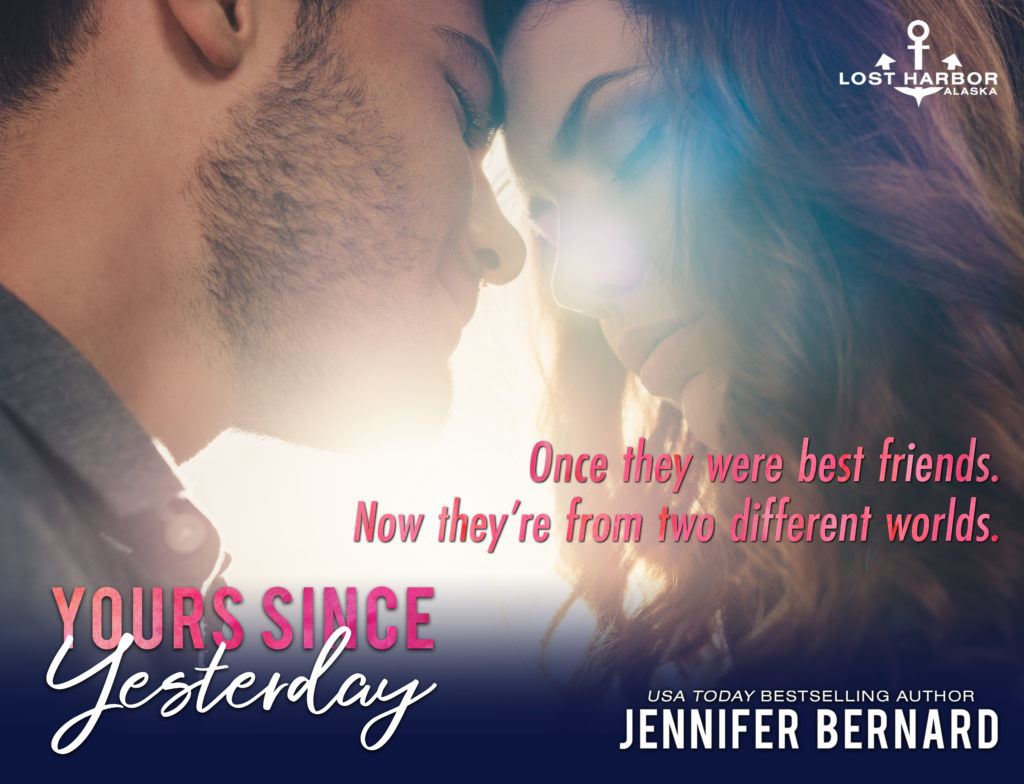 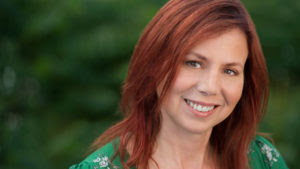 Jennifer Bernard is a USA Today bestselling author of contemporary romance. Her books have been called “an irresistible reading experience” full of “quick wit and sizzling love scenes.” A graduate of Harvard and former news promo producer, she left big city life for true love in Alaska, where she now lives with her husband and stepdaughters. She still hasn’t adjusted to the cold, so most often she can be found cuddling with her laptop and a cup of tea. Sign up for her newsletter for book news and fun exclusives.

Posted by Janet Greaves at 1:30 AM