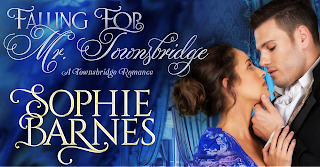 He knows he ought to forget her…
When William Townsbridge returns from Portugal and meets Eloise Lamont, the new cook his mother has hired, he’s instantly smitten. The only problem of course is that she’s a servant – completely off limits for a gentleman with an ounce of honor. But as they become better acquainted, William starts to realize he must make Eloise his. The only question is how.
Eloise loves her new position. But William Townsbridge’s arrival threatens everything, from her principles to her very heart. Falling for her employer’s son would be monumentally stupid. All it can lead to is ruin, not only for the present, but for her entire future. So then the simplest solution would be to walk away. But can she? 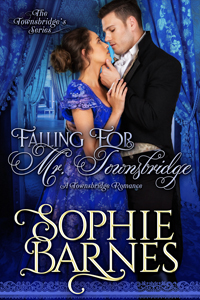 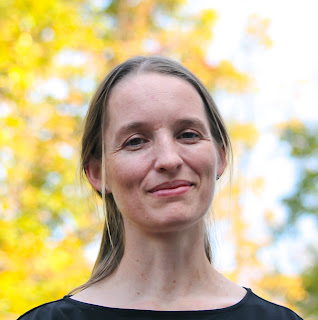 Born in Denmark, USA TODAY bestselling author Sophie Barnes spent her youth traveling with her parents to wonderful places all around the world. She's lived in five different countries, on three different continents, and speaks Danish, English, French, Spanish, and Romanian with various degrees of fluency. But, most impressive of all, she's been married to the same man three times—in three different countries and in three different dresses.
When she's not busy dreaming up her next romance novel, Sophie enjoys spending time with her family, swimming, cooking, gardening, watching romantic comedies and, of course, reading.

The newest in the Townsbridge's by Sophie Barnes is sure to keep you up most of the day! I give Falling for Mr. Townsbridge a full steeping 4 teacups! Mr. William Townsbridge has recently returned home from his travels and he sits down to a most delicious meal with his family, his mouth can't believe what wonders fill it and then the delicious pastry to follow just takes him away. He learns his parents have a new cook, Mrs. Lamont. At dinner, his sister Athena suggests he meet Mr. Lamont and he shrugs it off until that evening after everyone has retired. He heads to the kitchen expecting to find an older lady and some delicious pastries, instead, he finds the most attractive young woman and takes his breath away. Mrs. Lamont or Eloise is absolutely shocked to find the youngest Towsbridge man standing before her, she knew had arrived home but was not expecting him to appear in her kitchen or at least she laid claim on it but it was, in fact, his kitchen. The two are both attracted to one another but Eloise knows she can't ever hope to marry a nobleman. She pus the idea out of her head and tries to go about her days... but she can't help thinking about him nor can she seem to not bump into him.


William is also very taken by Eloise and despite his brother's advice to stay away from her, he can't seem to help himself. When Mrs. Lamont's grandfather becomes deathly ill, he helps her gain a carriage and head home but in that time he purchases a house with the help of his parents and his intent is to help Mrs. Lamont reach her dream and open her culinary school. But he also asks something else of her and this causes her world to turn upside down and her heart to shatter...

Can these two defy society and make a life for themselves? Or must they go on only dreaming of the one they truly love for the rest of their lives?

This is such a lovely read, I really enjoyed Williams' arc, he grew a lot from the beginning of the tale and Eloise is such a strong, courageous young woman and she isn't going to use what is at her hands to use in order to gain a place and society and a spot in a man's bed. No, instead she holds strong and is quite happy with her state in life. Barnes did a phenomenal job with this story, the plot keeps one turning the pages and rooting for the romance blossoming. The only thing I would say is the romance went too fast, I felt William fell for Eloise a tad too quick and also there wasn't enough tension between the two. I love that there is a class difference between the two, I think it's great seeing more authors writing about this because I'm sure these romances and ultimately marriages did occur, yes at a cost, but they most likely did occur and it's wonderful to see more books written about these romances and the struggles they must overcome. This is definitely a book you will want to add to your summer TBR! 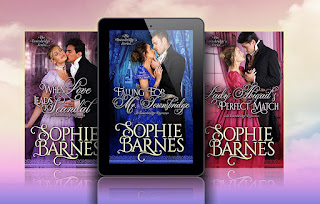