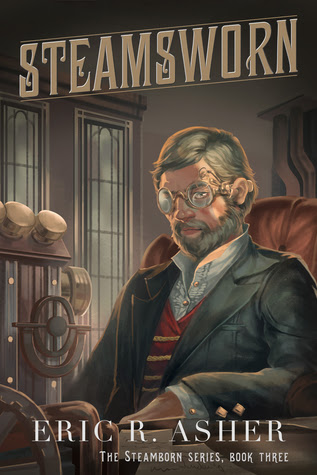 
The world dies in war only to be reborn. It is the way of things, and always will be.
Forged in the Deadlands crucible, and armed with the knowledge of their true enemy, Jacob, Alice, and their allies bring the fight back to Ancora. They’ll liberate their homeland, or die trying.
The wounds cut deep in their darkest hour, but in the end, vengeance will light their path.

EXCERPT:
“Whoa,” she said, jumping away from the burst of heat and flame. “That went up a little faster than I expected.” She reached the edge of the rack with her toe and forced it beneath the boiler.
Another rumble and crack echoed from the corridor behind them. Jacob turned around in time to see Drakkar come running back into the station, his cloak rising in the breeze behind him.
“Scythe Beetles!”
Jacob swung the air cannon off his back and racked the slide.
“Jacob, Alice!” Samuel’s voice rang with authority. “Fall back with Smith. If you need to use the cannon, use it at the last second. You don’t want to injure a Scythe Beetle. You want to kill it.”
Drakkar’s arm snapped out to the side, and his sword unfolded with a rapid series of clicks.
There was a calamity behind the Cave Guardian, and it grew louder with every second. Jacob and Alice scrambled off the railcar. Jacob paused and then ran to the pump to turn it off. The last thing they needed was wet fuel bars.
Alice made it to Smith ten steps before Jacob did. Samuel and Drakkar set up a loose line between the railcar and a steeper section of the shattered wall.
Smith spoke into his transmitter. “Mary! Get the chaingun down here now!”
Her static-laced reply came back in an incoherent burst.
“Chaingun! Now!”
Mary cursed and began shouting orders before she stopped transmitting.
Drakkar had the best view of the corridor, and everyone tensed when he said, “Here they come.”
The iron gate in the stone hall collapsed at the first impact. The metal rattled and screeched as it was twisted and trampled. The creatures were not very fast, but once they were moving, nothing seemed to stop them.
They ran on three-toed claws, the spikes on their legs tearing through stone and rending metal as they crashed onto the platform. Jacob watched in awe and horror as the front most beetle paused, and its back split open. A pair of leathery wings extended from beneath the carapace and gleamed in the rising moonlight.

Author Bio:
Eric is a former bookseller, guitarist, and comic seller currently living in Saint Louis, Missouri. A lifelong enthusiast of books, music, toys, and games, he discovered a love for the written word after being dragged to the library by his parents at a young age. When he is not writing, you can usually find him reading, gaming, or buried beneath a small avalanche of Transformers.


1.       What books have most influenced your life?
There have been a great many, but I always come back to Black Sun Rising by C.S. Friedman. It’s a masterful blend of SF/F that is incredibly dark and full of hope all at once. Northworld by David Drake is another I love to reread. I have a cycle of favorites that I love though, including Patricia Briggs, J.K. Rowling, Tad Williams, Melanie Rawn, and more.

2.       How do you develop your plots and characters?
The characters develop more and more as I write the story. It’s not uncommon for me to go back and adjust the characters in the earlier scenes after I finish the story. Inspiration for the plots can come from just about anything; movies, video games, an interesting shadow cast by a leaf, anything.

3.       Tell us about your protagonist. What was the inspiration?
Jacob and Alice are both so important to this story in my head. They’re both reminiscent of the kinds of characters I loved to read when I was younger. Jacob has a brash attitude that gets him into trouble, and a quick wit to usually get him out of it. Alice provides some much needed common sense. That’s not to say Alice doesn’t get into the thick of things, because she very much does.

4.       What about the Butcher?
Ah yes, the villain. I love villains. I love unexpected villains that you never see coming, but I also love the villain that lurks in the shadows. He’s not front and center, but he’s always behind the scenes manipulating things in usually terrible ways.

5.       What was your favorite chapter (or part) to write and why?
The airship battle is one of my favorite scenes in Steamsworn. The characters take a huge gamble going up against a fleet that has them seriously, comically, outgunned. It fits the group dynamic of being reckless and selfless all at once.

6.       Did you learn anything from writing this book and what was it?
I learned a lot about mechanics. I especially learned how much I didn’t know about steam engines. It’s one of those things I had a rough understanding of, but actually getting some of the models in-hand and seeing some larger engines operating and broken down helped tremendously.

7.       Is there a message in your novel that you hope readers will grasp?
There are a few messages woven throughout the trilogy, but I’d rather readers find their own messages.

8.       What’s next?
I have two anthologies I’m currently involved in, and I’ll be writing the sixth Vesik book after that. I’m really excited to get back to Vesik after all the events in Destroyer Rising.

Posted by Janet Greaves at 9:06 AM