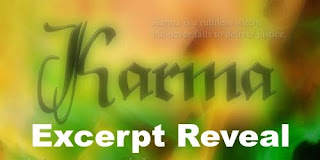 Today we’re having an excerpt reveal for Karma by Nadine Nightingale! I am so excited to share this fantastic new paranormal romance! 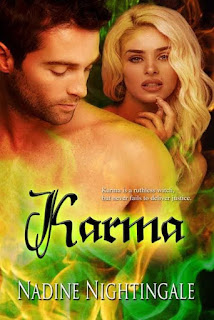 People call me all sorts of names—bad girl, black sheep, and my all-time favorite...Satan’s bride. I could blame the fact I’m a witch for my behavior, but the truth is I’m infuriating, arrogant, and stab-worthy.
Alex Remington is a hunter and everything I’m not—righteous, honest, caring. We used to have a thing, but that was before he learned I’m a witch and tried to kill me.
Eighteen months later, he’s back in my life and we have a deal; I’ll help him save his brother and he’ll disappear from my life for good. But karma can be a real bitch…

Exclusive Excerpt:
For the longest time, I just stared at him. His perfect abs, the mesmerizing face, the fatal eyes—fuck, the guy was perfection. But this—us—was wrong. He was a hunter. I was a witch. He was gentle, good, and caring. I was a selfish, evil witch resented by my own mother .
“Amanda?” He stepped forward until we were eye to eye. “What’s going on?”
“Nothing,” I barked. “Just go back to bed, all right?”
He moved forward until we were chest to chest. “Sure about that?” His hands trailed down my arms. “The wall is so much more fun,” he said, kissing the edge of my lip.
My senses reeled. All I had to do was tell him we were over, but one touch, and I was a wet mess that hungered for more. “Alex,” I moaned as he reached for the hem of my shirt. “Please.”
Kissing the other side of my lip, he smiled. “Please touch me? Please leave me alone? Gotta be a bit more specific, Manda.”
When I didn’t reply, he pulled my shirt over my head and pushed me against the wall. Cupping my ass with rough hands, he trailed kisses down my neck.
I pressed my palms against his chest and wrapped my legs around his waist. Tension built in my belly as I felt his hard-on against my black lace panties. What in God’s name was wrong with me? One second I wanted to get as far away from him as possible, and the next I wanted him buried inside me. “Alex,” I choked out. “This is a bad idea.”
He carried me to the table. When he set me down, his eyes locked with mine. “With you, everything seems to be a bad idea.” His gaze dropped to my lips, and before I could say anything, his mouth covered mine.
He kissed me so hard, my head bent back. Desire spread through my body like a blazing fire, and no matter how hard I tried to fight it, I needed him.
Running my hands through his thick hair, I pressed my legs against his rock-hard ass and pulled him closer. “Alex,” I whispered against his lips. “I want you.” My chest rose and fell with excitement and nervousness.
“Say that again,” he ordered in a husky voice.
I pulled his boxers down. “I. Want. You.” 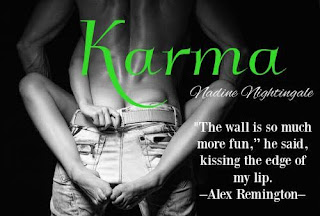 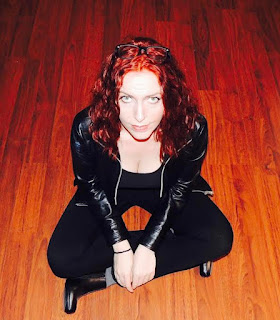 Nadine aka Dini is a traveler at heart. She considers the world her home and practically lives out of her suitcases. When she’s not glaring at a blank page or abusing her poor keyboard, she spends her time reading, watching movies (preferably horror), pretends to work out, and hangs out with friends and family. Poor girl also suffers from a serious Marvel superhero addiction. So, if you run into her at night, wearing black, know she’s secretly dreaming of being the infamous Black Widow.
Her love for writing started in the sixth grade where she annoyed her classmates with a short story featuring Sailor Moon characters, a cemetery, and creepy ghosts. Yes, she’s always been addicted to the dark side. Nadine writes paranormal romance. Her debut novel “Karma” the first book in her paranormal romance series Drag.Me.To.Hell. is published by the Wild Rose Press and will be out in May 2016. She has a serious girl crush on her protagonist Amanda Bishop.
Nadine has a BA in Comparative Religions and studied Creative Writing at the University of Oxford.


<script src="https://widget-prime.rafflecopter.com/launch.js"></script>
Posted by Janet Greaves at 2:05 AM